Immigrants: Travel to other cities in your own locality

Today I woke up with a construction next to my window.  Suddenly, overnight, a scaffolding was put up on the facade of my building. And to add more weird elements to this anecdote, I was awakened by the sound of music and not just a hammer!

Not ordinary music, it was singing in a language that I thought was either Hebrew or Arabic. How ignorant I am or how much we look alike! To be honest.
I was in my living room, and The worker I saw hanging on my balcony worked with this music and very carefully especially quiet as if he did not want to wake the neighbours up to the noise of his hammer but he didn't worry about the music.
What would the neighbours think? In my case, that music reminded me of a piece of Venezuelan folk music called “llanera"(music from the plains), a melody that probably for a non-Spanish speaker is a set of screams and wails. In this kind of music genre, the singer holds the notes for a long time and it sounds like a kind of wail, pretty similar to this Arabic Melody. So for someone not instructed it could be a horrible sound of suffering, and for me, it touches my childhood, when I travelled with my family and  I enjoyed it without knowing it.
What memories, what sensations does this "musical wail" reflect in the builder?  I do not know to which country of the Mena region I travelled, but definitely, even in confinement, you can travel to distant lands.  It is only important to be aware of your surroundings and to be curious and respectful of others.
Publicado por Nadia Goncalves en 1:40 p. m. No hay comentarios:

Lockdown: the inside travel time

It is official: the Coronavirus changed the world! Unpredictable and unprecedented, some adjectives to describe the current situation. The entire world is locked down, and social life won’t be as usual.

How will the travel and tourist field be after COVID19? Most of the flights are canceled and the majority of the airline companies are broke and declared bankrupt. So, in my personal opinion, I consider that the local trips will increase, much more than the international ones. Definitely, humankind won’t stop in one place. For years we have been nomads! So in the short term the travels will be around your own city and region. It will be like meeting again and feeling your city! The city that you used to live in but you didn’t pay attention to because you were too busy to see all the wonder.
I will promise, my friend! After this pause, you will see your neighborhood with different eyes and you will be surprised at all the precious things that you didn’t pay attention to. For example, I just moved to a green area near the sea and far away from the pollution and chaos of Barcelona city, and thanks to that I can appreciate how marvellous nature is. Usually I take a long walk with the dog of my roommates and while he smells everything from a flower to another dog's turds! I am delighted with the flowers and birds, all of them so different so unique. I am grateful for this forced stop time, because we used to live like cars, that is to say, with the headlights on and driving in automatic pilot mode.
I had three flight trips cancelled, and of course I am mad about that; however, I am determined to walk more around my neighborhood and be positive about the consequences. And as Charlotte Bronte said: “If we did not sometimes taste of adversity, prosperity would not be so welcome”. So welcome to uncertainty!
Publicado por Nadia Goncalves en 6:06 a. m. No hay comentarios:

Serendipity and the magical life coincidences

With the Beach Boys “Good vibrations” song as the soundtrack, I am flying to New York, with the impulsive decision to follow my heart (So naive, so bold, so young). My connection was in Amsterdam, and only there was I aware of my longing to drink a Heineken, one of my favourite beers, in the country of its creation.  I was there! In the Netherlands, with a delayed flight and a Heineken bar, a huge opportunity that no one can let go by.

The tiny pleasures of travelling that make us feel alive! I know that it is weird but I really enjoy those moments of magical coincidence, those serendipities. Those things that only when you find them, do you notice the magical coincidence and say thank you to the universe or whatever energy it is that connects us.
Serendipity is defined in the Merriam Webster Dictionary as “the faculty or phenomenon of finding valuable or agreeable things not sought for”. As was this this Netherland moment or when I was in Cartagena and I danced the salsa song “Rebelión” in a club, and the singer says “En los años 1600 / cuando el tirano mandó / Las calles de Cartagena /aquella historia vivió” (In the 1600's /   when the tyrant ruled/  ....lived that story).
One of my life's epic moments was when I visited the Guinness factory in Ireland. I want to go back in time and return there. That day I lost my best winter jacket and hat, but damn it! I learned how to serve an authentic Irish beer in Dublin. That's being optimistic! ... and a little bit alcoholic.
What is next in my bucket list of wishes? Do we really know what we want or we really need to be aware of them to recognize them and make them a reality? What we want or really need to be aware of the serendipity of our life. I am ecstatic with happiness when I was drinking a Heineken in the Netherlands, so we have to be alert and open our eyes because our real wishes come true even if we are not precisely aware of it.
Publicado por Nadia Goncalves en 3:06 p. m. No hay comentarios:

Barcelona: The cheekiest city in the world

If you need to describe Barcelona with only one word, I will say it: Cheeky!  Barcelona is boldly rude, impudent, in some ways disrespectful but at the same time absolutely playful, young and naughty.

You can be in Barcelona and no matter how you behave, what you look like, how weird you may be, it will not matter! Barcelona does not care! Believe me, you can walk 20 blocks naked and painted yellow and I can guarantee that nobody will tell you anything, not a word, not an inquisitive eye or judgment. Nothing! Barcelona doesn’t have prejudiced. Barcelona is the typical teenager with blue hair, arms covered with tattoos, wild and crazy who doesn't care what anybody thinks.
I saw a guy wearing a Pokemon costume in the subway and nobody said anything! At the beach, ladies show their boobs, and a huge diversity of colors and shapes are exposed like a modern art museum, and nothing happens. That is OK! A bunch of boobs is harmless, some people will even say that it is the highest expression of feminism and freedom of expression.
However, some situations are extreme but nothing happens, like an old lady who stole a beach umbrella from a Pakistani who rented it at the beach and threatened him with the Police to send him back to his country, and nothing happened.
Sometimes, and quite often, I find myself as cold as any European. The other day, I was walking in the middle of the night and a French couple asked me about an address, they had not finished speaking and I already answered them: NO! I did not care what they said, I was scared. Maybe European people are scared of others. Fear of otherness!
Another day, a very shabby middle-aged guy asked me to let him get into the subway with my ticket. The same reaction: NO! I was scared! It is illegal for two people to get in with the same ticket. But what would have happened in Latin-American? My reaction would have been totally different. I would say "YES", why not? Or maybe to be a decent citizen I would buy a ticket for him, but always saying "YES!".
Sometimes I think there is an extremely thin line between tolerance and indifference. Here I am, in this crazy city, and feeling like   Alice in Wonderland, walking between feelings of absolute freedom and indignation. Here I am, walking in between! Living with two opposite cultures and trying to adapt without losing my essence.
In my opinion, everybody has to experience the European wildness of Barcelona, and avoid making any judgement, but leave the city as soon as you start to be indifferent of the people's well-being around you. Fight against the feeling of losing the Latin American kindness and brotherhood. It is a time to feel bold, but never uncaring.
Publicado por Nadia Goncalves en 4:12 p. m. No hay comentarios: 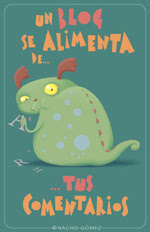